The Moabit synagogue association came into being in around 1890 and held its services in an apartment in Lessingstraße 19. It consisted of 220 members, who saw themselves as law-abiding orthodox Jews and who were predominantly academics. This synagogue was also known, therefore, as the “Temple of the Intelligentsia”. In 1898, an application was made to erect a pavilion in the courtyard housing a prayer hall with 250 seats. In 1905, the small synagogue was finally inaugurated.
During the Reichsprogromnacht in 1938, the synagogue was completely gutted by fire. The remains were removed in 1939.

On 13 March 1919, the Jewish Congregation Adass Yisroel decided to establish a school. At the beginning of the school year on 2 May 1919, the first two lowest preschool classes could begin. Due to a lack of rooms, some school classes were accommodated in the community hall at Artilleriestraße 31, as well as in Wielandstraße (Charlottenburg). These premises were dissolved in April 1926 and moved to Wullenweberstraße (Tiergarten) the following year. Until 1926, further classrooms were used in the district of Mitte.
In 1924, the Jewish Congregation Adass Yisroel acquired a studio house in the street Siegmunds Hof 11 in the district of Tiergarten, in the Hansaviertel. The entire school and a synagogue were accommodated there. The inauguration ceremony took place on 10 October 1926, and by 1927 the number of pupils had risen to 600.
On 9 December 1928, the Realgymnasium moved from Neue Schönhauser Str. 13 to the first floor at Siegmunds Hof; the Volksschule zu Pessach also moved in 1930. In addition, a special music room was set up in Siegmunds Hof 11, and a Blüthner grand piano and 100 choir books were purchased.

At the end of March 1939, the schools of Adass Yisroel were closed. They never opened again. Some pupils and teachers were able to emigrate; others stayed and were transported, then murdered.
After the closure of the synagogue in Artilleriestraße in 1939, the synagogue in Siegmunds Hof was still able to be used until summer 1941. It was even possible to build and hide a Sukkah on the site for the Feast of Tabernacles in 1941, despite being prohibited from doing so by the Gestapo. Afterwards, the services took place in the weekday synagogue in Levetzowstraße. In November 1943, the Siegmundshof building was also destroyed in the heavy bombing raids on the Hansaviertel.

The synagogue was built within easy reach according to the plans of the architect Johann Hoeniger (from 1881 he was the master builder of the Jewish community and was already responsible for the construction of the synagogues in Rykestraße and Fasanenstraße). The new synagogue in Levetzowstraße was inaugurated on 7 April 1914 and quickly became the meeting point of the growing Jewish population from Moabit and the Hansaviertel.

With more than 2120 seats, the synagogue was one of the largest in Berlin and one of the most magnificent.

On 9 November 1938, it was set on fire by the Nazis but was not destroyed. From September/October 1941, it served as a collection camp for Jews who were to be sent to the concentration camps for deportation. This camp existed from 18 October 1941 to 26 October 1942 and was misappropriated for a second time, between 2 March and 12 March 1943. According to the records, about 20,000 people passed through it.
(Source: https://www.stolpersteine-berlin.de/de/glossar#letter_s)

In order to ensure that the deportations ran smoothly, the employees of the Jewish community were forced to compile the transport lists and to help the prisoners at the collection point to record their financial circumstances and complete the forms. In addition, the Jewish community alone was responsible for caring for and supporting the people intended for deportation.

The synagogue itself was damaged during the war but not destroyed. After the end of the Nazi regime, it stood empty for ten years until the Senate had it demolished. Unnecessarily in fact, because according to eyewitnesses it was neither unsafe nor in danger of collapsing. A Jewish community that would have needed such a large building no longer existed, however.

While 12,286 Jewish people lived in Tiergarten in 1933, there were only 161 in 1945 (Kurt Schilde: Versteckt in Tiergarten, Auf der Flucht vor den Nachbarn. A memorial book for those hiding in the district during the National Socialist era, Berlin 1995, p. 16f.)

In September 1938, Hitler’s star architect Albert Speer, who had been appointed “General Building Inspector for the Reich Capital Berlin“, developed the plan to sacrifice thousands of houses on the magnificent north-south axis of the future world capital “Germania”. In 1938 alone, 7,000 apartments were demolished. (See Spiegel 30/1995 “Siegreich bauen”.) Since there was a lack of money and material to build replacement apartments, Speer came up with the idea of the “forced expulsion of Jews” from their apartments. In 1941, the Hansaviertel was declared “free of Jews”.

The architect Hans Stephan (1902–1973) was recruited by Albert Speer as head of department for the redevelopment of Berlin. In 1944, Speer commissioned him to lead the reconstruction planning of Berlin in the newly established “Arbeitsstab für den Wiederaufbau bombenzerstörter Städte” (“Task force for the Reconstruction of Bomb Damaged Cities”). From 1948, he worked for the municipal building authorities in Berlin (despite various protests about his past activities) and in 1953 took charge of regional and city planning for the Senator for Building and Housing in West Berlin. In 1956, he was even promoted to Senate Building Director, where he was involved in the planning of Interbau 1957 (see Spiegel article). In 1960, he resigned from his post as Senate Building Director as a result of political pressure.

Excerpt from the speech of Pastor Sabine Röhm, Evangelische Kirchengemeinde Tiergarten,
for the inauguration of the “Window of Remembrance ” on 9 July 2018 (in the Hansaplatz underground station, on the Hansa Library side)

…A former Jewish resident of the Hansaviertel, Edith Marcuse, sister of the German-Jewish philosopher and writer Ludwig Marcuse, left in her estate descriptions of everyday Jewish life from 1941. “It was already a period of insurmountable barriers and deportations. Escape was inconceivable. In her notes, she describes the waiting as alternating between hope and fear”. I quote from Bertram Janiszewski’s book “Das alte Hansaviertel”: “The anxiety amongst the Jews is indescribable. Scenes unfolded on the street and at the synagogue on Levetzowstraße: helpless Jews, screaming Jews in crying fits (…) As much as I try to stay calm, this choking fear is hard to escape”. Edith was also deported in 1942 and died on 8 May 1945 at the age of 48. Her brother survived in exile.

All this happened before the eyes of the general public and the Protestant and Catholic Churches, making them complicit. It took a lot of courage to defend oneself against the perpetrators of violence and murderers. Most did not dare and remained silent. But many Christians supported the Nazis. In the Protestant Church this included the “German Christians” who wanted to combine the Christian faith with the ideas of the National Socialists. They even worked to ensure that Jews who had converted to Christianity were excluded from the church. This fundamentally contradicted the Christian message and the Christian image of humanity, which the Confessing Church had already written down in an impressively provocative way in 1934 in the Theological Declaration of Barmen. The persecuted were denied the protection they so desperately needed.

Memories move, they set emotions free. The memories we commemorate tonight are grave and burdensome . We remember so that they are not forgotten or repressed, so that future generations will know about what happened. The more time passes, the more urgent this task becomes, for there are now young people to whom the name “Auschwitz” means absolutely nothing.

And when time passes and there is no one left to tell their own stories and talk about their own experiences, then others are needed to share those stories and experiences, by telling them, writing them down or creating art. Such as this “Window of Remembrance”, on which the names of 1030 Jewish inhabitants have been immortalized. These people died nameless, with only a number. But names are important. They make a person unique and distinct. By losing their name, they lost their personality, their individuality, their dignity and finally their lives. How good it is that at least some of them get their names back here in this window (and through the stumbling stones on the pavements of the city).

That’s why it is good that there’s this Window of Remembrance. It is an important memorial. And it is good that you are here to appreciate it and to remember the past together – so that we have a future.

Thank you for this window!

Adresses of the jewish neighbors at Hansaviertel 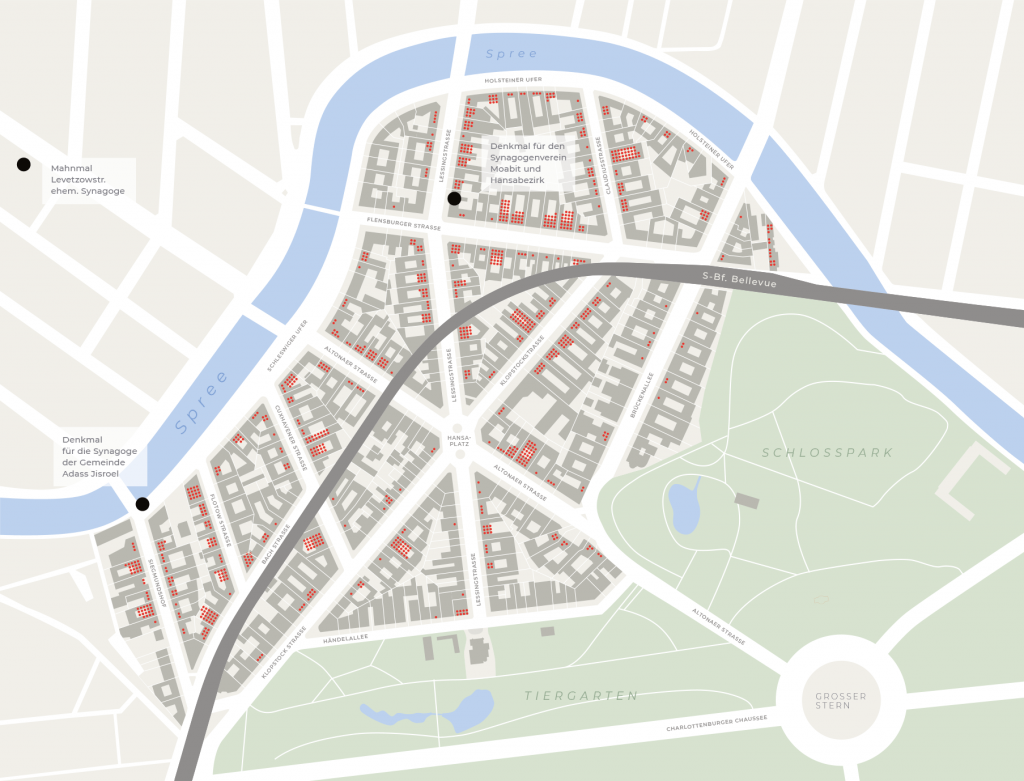